We’re well and truly into countdown mode now – just two weeks until QF7 leaves Sydney for Dallas Fort Worth with a Piglet and a Kiwi on board. Of course it won’t just be us on board… it will also be our luggage and while it’s included in our fare from here to Texas, I suspect Delta will be boosting their annual profits somewhat with the luggage charges from DFW to MSP! Along with the usual things one packs for a Summer holiday: t-shirts, shorts, undies, thongs (flip-flops to you Yanks), cozzies etc. we’ll also have our motorcycling gear: helmets, boots, jackets, pants and gloves, and a veritable smorgasbord of delicious Australian foodstuffs that have questionable nutritional value: Tim-Tams, Picnic bars, Red Rock chips, Shapes, Crunchies, Mint Slices and possibly even some Kiwi Peanut Slabs. Which all means plenty of space coming home for holiday purchases 🙂 (my cunning plan is working so far).

A couple of weeks ago we made an attempt to get a practice ride in with bonus point collection but unfortunately a fairly serious road closure/detour and the need to pack for my week of work travel meant that no bonus points were actually recorded but we did have a delicious hot chocolate at the Woodworks Cafe in Bungendore on our way home. We also confirmed the need to purchase new headsets for the Neotec IIs which are now winging their way from Italy and hopefully the sale of the Sena 30Ks second hand will somewhat mitigate the additional costs. 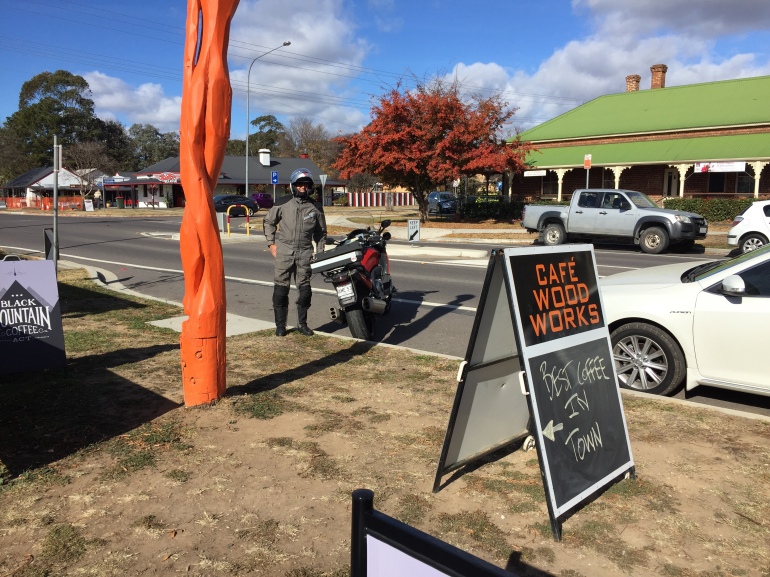 The other thing we achieved was working out how to get the bonus point coding from Basecamp into my Google Maps account so that I can do point-to-point routing on the back of the bike. I had previously got the impression that it wasn’t really possible to get routes into Google but some interweb searches revealed that it’s possible to import personal maps into Google and I can then colour-code the different groupings of bonus points (high, low, medium values; different categories and so on) which is very exciting. Unfortunately my winter gloves don’t work with the touch screen on the phone, but I know that the summer gloves work so with any luck I’ll be able to avoid traffic jams and so on as we’re riding around.

In other preparation news, we’re now two full weeks into dry June, which will drift into dry early July and I suspect by the finish banquet I’ll have Cadbury status (‘a glass and a half’)… Two weeks down, four weeks to go until the next vino! My first weekend without wine was a serious test of willpower – hanging out with my big sis usually means serious wine consumption but not last weekend and this weekend hasn’t been much easier – it’s bloody cold here at the moment and the call of the red wine while sitting in front of the fire has been strong… I’m definitely looking forward to getting back to weekend afternoon drinks when the rally is done!

Excitingly, this morning we did our first test ‘route planning’ exercise using the 2017 NIITWIT rally pack sent through by Lisa Hecker (thank you Lisa!!!). It was a great opportunity to see how we can use our different skills to plan an effective route and it went pretty well. Apart from a few quirks associated with trying to use an ipad rather than a laptop to get the waypoints into Google maps, it was pretty smooth sailing. Kiwi coded the points in Basecamp while I read through the rally book and worked out which combo bonus we should aim for and then worked out a route based on that. Once Kiwi had finished coding, we tested my draft route in basecamp, made some modifications for the fact that some of the points I’d originally chosen were daylight only and our plan would have had us getting to them at 1am and then worked out the full timing.

We came up with something that we think would have been a rideable route for us, with a couple of ‘stretch’ bonuses we could have added in if we had time, as well as some options to drop out bonuses close to the finish if we’d been running short on time. All in all it was a fairly successful effort and we were done and dusted in a bit under 2 hours. To be honest, I feel much more comfortable about our plan to route now that we’ve had a go! And we have a plan of attack in case there are other (different) combo arrangements, like the IBR ‘threads’ last year. Seriously, if I could just do the route planning (and/or there were bonuses for getting 10 hours sleep every night on the IBR) I’d be jumping on the back next year too! The strategy and ‘constrained optimisation’ problem solving involved in the route planning is right up my alley, I just can’t conceive of spending 20 hours a day for 11 days riding the route once I’d planned it!!!!

Anyhoo, if we get time we might do another practice next weekend. The main thing is going to be packing! Next weekend is our last weekend before we get on the plane, which means packing the bags, buying last minute supplies and getting seriously excited! Only 1 week and 4 days until check in opens for our flight! According to the Qantas app our 17 hour flight will only take 25 minutes:

Of course on the way back it will take 36 hours… the joys of time travel. Next update will probably be when we’re at the airport waiting to board. Until then, have a wine or a beer or something for me (someone needs to keep the businesses ticking over while i’m on the wagon)! I see much tonic water and dry ginger ale in my future as I pretend there is gin or vodka in it!