So it’s been a while since I posted. Prep has been ongoing but has had to fit in around some pretty hectic work commitments and we haven’t had much time on the bike. It’s also starting to get cold here now and my hibernation instincts are strong! That said, the past month or so has seen some new gear arrive in the post (as well as at Joe and Lori’s house in MN!) which is always fun.

First, our helmets! We each have brand new Shoei Neotec II headwear, purchased from Italy (since our local supplier wasn’t getting any in until they’d sold their Neotec I floor stock) and delivered the week before we left for our SS1600 adventure. Mine is ‘anthracite’ (code for poo brown but that wasn’t apparent when I was looking at the pic on the interwebs) and Kiwi’s is silver. Aside from the poo brown colour, they’re very nice helmets! Much quieter than my NXR and I am definitely enjoying the flexibility of the flip-top. If you’re looking for a new helmet and want something that’s comfortable, quiet and easy to use, the Neotec II is definitely a winner. The only thing that I can find to fault it is that for me, the retractable tinted visor is too short, so it partly interrupts my vision unless I keep my eyes up – but that’s really just a good incentive to keep my eyes up!! 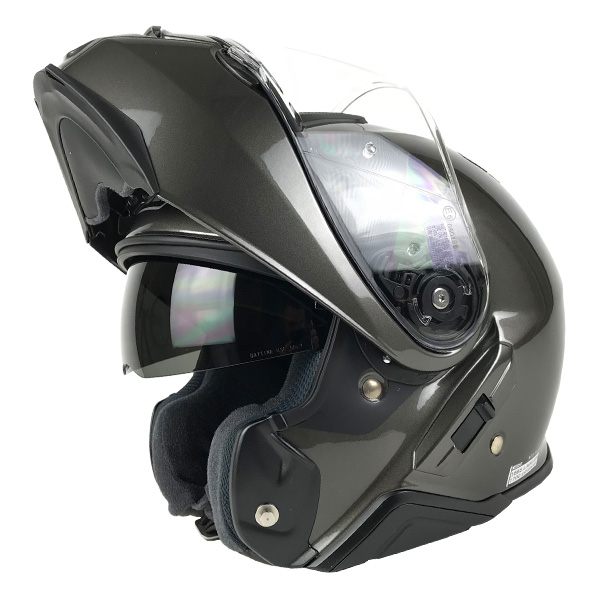 We also fitted new Sena 30K headsets to the helmets and those I’m less enamored with. Firstly, the ‘seamless mesh’ technology (the main reason we bought them) is not seamless. So far, we’ve reverted to the regular Bluetooth pairing option because after 3 separate attempts all we’ve managed to achieve is getting frustrated that we haven’t managed to get both helmets on the same mesh network. The functionality isn’t intuitive and the volume adjustment goes the opposite way to the 10R units we have on our other helmets.

Second, the units are bulky and because of the placement on the helmet, it’s hard for me to access the toggle to get the tinted visor up and down without accidentally pressing buttons on the intercom (at which point all hell breaks loose because I can’t work out how to un-press the button and usually have to do the old ‘have you tried turning it off, and turning it back on again’ trick!!!!). Also, because of the way the unit sits below the helmet, it gets stuck on the collar of my jacket when I turn my head. It just so happens that there’s a button on the bottom of the unit where it gets stuck and so just when you’re in the middle of a corner the headset does something you’re not expecting. This is unhelpful and potentially dangerous for both me and Kiwi.

Hopefully things will work better when we have summer riding gear on (less bulky gloves and jackets) but at the moment I’m regretting our decision to buy these units instead of the SRL model that integrates with the helmets and I wouldn’t recommend the 30K unless you have a lot of time and a lot of patience to get used to them and get them working well. So far we haven’t had either of those things and I’ve regularly spent a good two or three minutes asking ‘can you hear me? can you hear me?… what about now?’ because I’ve turned the volume dial all the way forward (and hence down) meanwhile Kiwi can hear me just fine. I feel like a turkey standing around with my high-tech helmet on and still apparently deaf. I’m going to be one crazy old bat one day!!!

In other news our vented gear has arrived from Rukka via Innotesco (whoopeeeeee!!!!) just in time for the first frost here in Canberra. I’ve tried my new jacket and pants on (standing in front of the gas fire at home) and they feel like liquid! I can’t wait to test them out on the roads but I’m not sure I can get behind Kiwi’s plan to do it before we leave for the US of A… Vented gear when it’s only 10 or 12 degrees outside isn’t really what I had in mind.

On a separate note, why does every manufacturer of motorcycling gear assume that if you’re female and ride a motorcycle you must like things that are pink, purple and sparkly!?!? I have nothing against women who do like the pink, purple and sparkly gear… but just quietly I’d prefer some options that aren’t quite so gender-specific. Anyway, I’m excited about the fact my jacket is white and about not baking alive if it gets warm on the East Coast in July! Yay!

Aside from purchases I’ve seen, I’ve been told that new lights have arrived in MN, ready to be fitted to the bike… as well as new shocks. If you want deets of these you’ll have to ask the Kiwi. While I’m sure both are important and valuable, at this point as long as the bike has lights and some form of suspension I don’t have that many cares to give. Sorry! But, unlike last year (when four full size moving boxes were shipped!), Kiwi has promised that these are the only things that will turn up in the MN post. We’re taking an aftermarket screen with us on the plane and then the bike will have more farkles than you can poke a stick at. Probably still not as many as Kiwi dreams of… but whatever…

So the main thing left to do is get more bonus point practice in. That was supposed to happen in earnest this past weekend but I became a snot monster with the cold currently doing the rounds here and that’s a bit gross inside a helmet… So we just did a short trip… I’ve been testing out how to get bonus point coordinates and coding into my Google maps account so that I can do stuff on the back of the bike which has so far been partly successful and I’m pleased with that progress.

With 6 weeks left until we get on the plane I’ll try to post more often about what we’re up to and how excited/shit scared I am… In the meantime, happy riding all…