So after a hot night for all on Friday night, we surfaced for breakfast at Mad Cowes cafe, our preferred source of sustenance and caffeination when on the island. I think we were all feeling a little wearier than we’d like but after coffee and some food, we purchased the day’s supplies (hot cross buns, cheesymite scrolls, and some fruit) and headed out to the track.

Theoretically, the ‘whole point’ of the weekend is to watch the Australian round of the World SuperBikes (WSBK), but there are other favoured activities while we’re there:

Saturday was a warm one in the sun, and our SBK bar tickets that got us access to covered viewing areas paid for themselves! The racing wasn’t bad, but not up to the usual standards, I think partly because of a change in the rules since last year… it’s long and complicated, suffice to say that some of the big names were out of the race long before the end and it didn’t appear to be because of a lack of skill. Anyway, after the SBK race early in the afternoon, we headed back to the house for some much needed sleep (on my part at least).

The other difficulty for me was that my back was playing up again. I’m not sure what triggered it, but it was not at all happy about walking, moving, or sitting – so lying down and sleeping was a good plan. After a couple of hours’ shuteye I was feeling almost human again and we wandered into Cowes for Mexican food and some wine. And then it was home for some more sleep!

Sunday dawned a better day. Sleep makes everything better! My back was still sore, but some stretching and other exercises eased the worst of it. We had a good day of the track and they’d made some last minute rule changes which meant the racing was much closer and more entertaining to watch.

We chilled at the track… 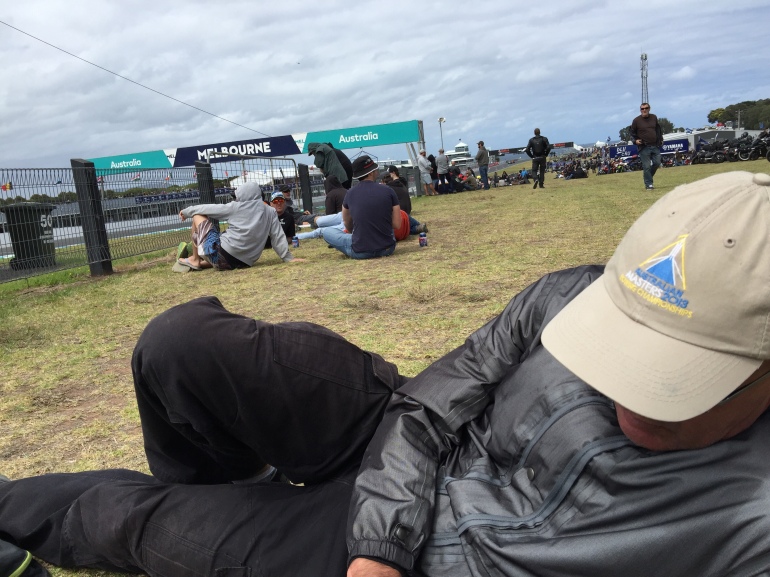 Someone was seriously cheeky!!!!

And we had a good time watching bikes go fast around in circles.

You may be able to tell from our attire that it was a little chilly – winds off Bass Strait made it a bit cool, but still a great day was had by all. I would also like to ask that whoever is in charge of the ‘rules for bakers’ changes them so that hot cross buns are not only available between Christmas and Easter but all year round. I don’t see why we should be rationed in the deliciousness that is warm spicy buns with fruit in them!

Dinner on Sunday was at the pub in Cowes – and in keeping with new ‘rules for the night before a big ride’ I abstained from alcohol. It wasn’t as hard as I expected it to be, and we still had a good night. I was in bed before 9 as we had an early start planned for Monday morning – we had to get back to Canberra in time to get the K1600 to the dealer for the rim to be fixed!

Monday morning hadn’t even dawned yet when we were up, dressed and on the bike. We had a quick brekkie of toast in Cowes and were on the road as the sun came up.

The ride from the Island back to Yarram along the coast is quite pretty at that time of day. We were cool but not cold and we stopped for second breakfast at a lovely cafe opposite the bakery when we got to Yarram – Cafe Aga. With an HCT toastie in my tummy things were looking up! I’d made myself a makeshift seat pad before we left the island which comprised clothing in a roughly triangular shape to stop me sliding forward on the seat. It was helping with posture and muscle fatigue but wasn’t super soft. But so far, so good!

Yarram to Orbost is not that much fun as a pillion. Some parts of the road are quite pretty, but it’s mostly straight and flat with not much going on. We headed on to Cann River with some fuel on board and enjoyed the ride through some more forested areas. The roadworks were fairly regular, and the only other major event of note was a Semi which had managed to leave the road at right angles – the local constabulary had arrived, along with some seriously heavy-duty tow trucks and were recovering the vehicle from the forest on the side of the road – thankfully it didn’t look like anyone had been hurt.

Arriving in Cann River it started to rain – not really heavily, but enough that it was nice to get off the bike for some lunch. Tummies full again we did my favourite bit of road from Cann River up to Bombala (the ‘Monaro’) then on to Cooma and back home.

The last 350kms were non-stop and I was pleased to get home. The GS is not a comfortable ride as a pillion, even with my makeshift seat going on, and by Monday night there was no seated position that didn’t cause a great deal of pain. I was tired and sore and not feeling the love, even though the day had been 15% shorter than the far ride the previous week.

Looking back, there are a few things I think I still need to do better:

Well it’s been a couple of weeks now and the K1600 has been repaired and is back in the garage! Over the Easter long weekend the plan is to go for a few local day rides and practice collecting bonus points (with me in the photo with the flag this time!) and then at the beginning of April there’s an Iron Butt Australia ride to Dalby in Queensland. I’m keen to see whether I can do an IBA ride (1600km in 24 hours) and this seems like a good opportunity for me to try! The only problem is if I can’t then I’m letting Kiwi down as well as myself… Neither of us will be able to take much time off work between now and heading to the US in July so this is probably as good a time as any for me to test my limits before we go.

So there you have it. That was my week doing roughly 2500km on the bike(s). I certainly didn’t feel fresh at the end of it and I need lots more practice – but I feel like my ride fitness might be improving… Maybe…

Until the next ride, I leave you with a photo from our other hobby, rowing, on Saturday morning – watching the annual Canberra Balloon Spectacular get off the ground