Day 5 dawned better – even if it was 4am… And maybe it wasn’t dawn yet, but whatever… I’d had some sleep, we had two days of riding and collecting points ahead, and I was no longer seriously sleep deprived – only moderately so.

Around 5am we were back on the road and found a gas station that was reported to be 24 hours so we could collect our receipt for the end of our rest bonus. In the US, that meant the pumps worked 24 hours, but not necessarily the staff… Thankfully I managed to make my credit card work with the pump sufficiently well that without even getting any gas I was able to get a receipt with a time and date stamp and we were on our way.

Our first bonus of the day was at Apple Orchard Mountain on the Blue Ridge Parkway and it was a beautiful start to the day. There were a few deer around which kept our speed down a bit, but otherwise we mostly had an incredible road to ourselves and watching the sunrise over the trees was good for the soul. Life was good: I was sitting behind my man, riding some beautiful roads, watching the sun rise on my holidays. I’m blessed!

After Apple Orchard Mountain we hit 20 Minute Rock and then Starbucks for coffee, before we found one of the original slave blocks, standing behind an old railway station.

One of the incredible things about the work that Team Strange does preparing for these rallies is the stories they find and share. And while I find some parts of America’s culture difficult to understand, I think it’s laudable that even the moments in American history of which its people are least proud are still honoured and not denied or covered up. I think it’s such a mature approach and something that I can learn from: those moments we’re not proud of are part of what makes us who we are.

Onwards and upwards: we headed to the statue of an extreme explorer whose dog will continue to affectionately hump his leg… forever… And then to Pennsylvania! 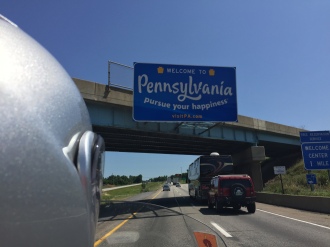 Because that’s what dogs do… 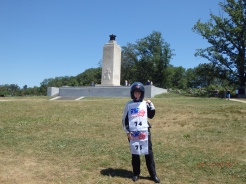 When we picked up the R1200RT last year, it had been carefully collected and lovingly stored by Dan Simmonds and we shared some amazing carrot cake in Gettysburg before our ride to Minneapolis. Dan came out to Oz earlier in the year to do some serious riding down under and when we decided to head for the Eternal Light Peace memorial just outside Gettysburg, Kiwi gave Dan a call to see if he was keen to come say hello – and he was!

Dan and his partner, Renee, came to meet us at the flame just after midday, bringing bananas, ice and some fruit smoothies, as well as some great smiles and some non-rally related conversation. It was just what we needed. Getting off the bike for 20 minutes, talking about life outside the rally ‘bubble’ and getting some new air conditioning was very restorative, I think for both of us. We also crossed paths with Martin Cover, Lisa Hecker and Steve Rufo which was nice. Kiwi reassured me they’d had as difficult a day on Day 4 as we had!!

We headed west to our next bonus and considered the strangeness of the shape of Maryland… Seriously USA, what is with that???? It’s like everyone carved off all the bits of the country they wanted and then went, ‘Hey, Maryland, you can have what’s left’. 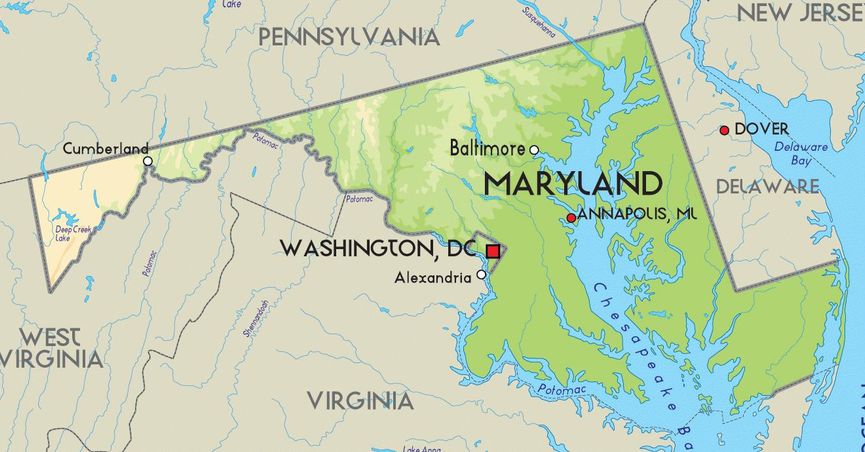 We crossed state lines at least 7 times on Thursday! We went from Virginia, travelled east and somehow ended up in West Virginia, then Maryland, then Pennsylvania, then back to Maryland for about 35 seconds, then back to WV, then west into Virginia!!! And so on. Kiwi was very confused – I swear we were going in a straight line and yet it was like we were going backwards! 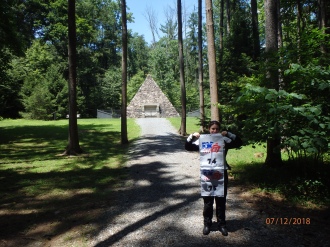 Thankfully with the assistance of Google we went the right way. We saw some amazing sights on the back roads of West Virginia, and even after we entered the ‘dark zone’ that is the radiocommunications blackout area around the Green Bank radio telescope, we were able to find our way. It was incredibly beautiful and even after a 14 hour day I was feeling relaxed when we landed in Lewisburg for the night. Dinner was at Ruby Tuesdays (try getting that song out of your head now, I dare you!) and then I crashed out. 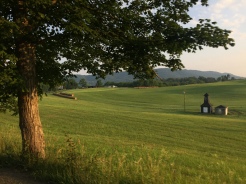 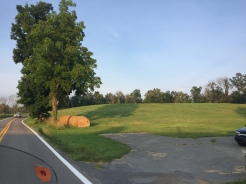 One response to “Day 5: Bedford, VA to Lewisburg, WV”