Day 4 started early and after not enough sleep! We’d hit the checkpoint before midnight which meant we could get our rally pack at 6am. If we weren’t there at 6, we’d have to wait until 8am and we’d lose 2 hours of potentially valuable routing time – but we weren’t staying at the rally HQ hotel (they booked out quickly!). So Kiwi was up at 5 and I was dragging my sorry ass out of bed at 5.20 to get dressed and head over.

Since I had managed to leave my thongs (flip flops) in our room at Lexington (black thongs on dark carpet = oops), I was in my motorcycling boots, 3/4 length gym leggings and a t-shirt. This is a new fashion trend I expect to see picked up in Paris later in the season. Another member of the Australian contingency was found to be wearing his top inside out, a trend I’ve found to be particularly popular among the sleep deprived, followed closely by clothing affixed to the body back-to-front!

Needless to say the 5.45am crowd at the Maggie Valley Inn was pretty rowdy. We were plied with breakfast foods of all categories and flavours (delicious, thank you!) and then handed our rally packs at which point the room cleared of people, and fast! We were due back at 8am for the mandatory riders meeting so we headed off to do as much routing as we could in the intervening period.

Kiwi was a machine. He smashed through all the coding in about an hour, and I was struggling to keep up reading the rally book and trying to get a sense of where the ‘big points’ were within our reach doing the 12-14 hour days we’d agreed. Just looking at the points on the screen, we knew we’d be heading north east from Maggie Valley. There were big points available heading north west towards Minnesota, but we wanted to see new things and places, and we’d ridden through Indiana, Illinois, Iowa and Wisconsin on our way down. So it was the Virginias and Pennsylvania for us!

We had enough of a plan by 7.30 that we decided we’d pack the bike and head off after the riders meeting. Unfortunately something went wrong with the Basecamp files the Kiwi was using and a whole heap of bonuses from Leg 1 were showing up on the Leg 2 file he sent me. Mostly it was pretty obvious which ones these were, as we’d already hit them (the stadiums, for instance) and they were to the south and west of where we were… but it wasn’t reassuring for me. As a result, I was a bit snarky and scratchy about ‘well, are these the right points’… But Kiwi was patient with me and we figured it was ‘good enough’ for our purposes (this is a major improvement for me, the girl who wants to make everything perfect).

Our day was going to involve heading north into West Virginia, then up alongside the mountains until we hit the Blue Ridge Parkway and decided we’d stop for the night – the rest of the route could be decided that night or in the morning.

We attended the riders meeting, got some additional information about a bonus we knew we weren’t going to be able to get to, and the rally masters got pretty emotional about some things that had been going wrong – specifically riders getting on social media (a big no-no) and following their GPS to places they shouldn’t be going (also a big no-no and something we’d experienced yesterday!). I think we all felt pretty chastened and my resolve was strengthened about trusting Google Maps over the Garmin.

We saddled up quickly after the meeting and headed for the road. The scenery was beautiful with streams running beside the road and clouds draped across the countryside.

First up was Hot Springs, NC – a pretty little town with not much happening on Sunday morning. Again, it was good to get our first bonus under our belts but I realised we’d forgotten to write our starting odometer reading on our score sheet and also that we’d forgotten to claim the checkpoint bonus on Leg 1 – something Kiwi confirmed as a rookie mistake, but one not only made by rookies. It was ‘only’ 50 points, but it was 50 points we could have claimed with no additional riding.

After HOT was POT – a memorial to bridge burners near Greeneville, TN. And then on to WTF – an historical marker remembering the Whitetop Folk Festival at the top of a very cool road. By now I was really feeling the fatigue and it was nice to have some time off the bike, eat a banana and sit in the shade. I’ve always given Kiwi a hard time about sleeping on park benches and concrete slabs, but at 1.20pm after only 4.5 hours of sleep I was prepared to take a break on some gravel beside the road. 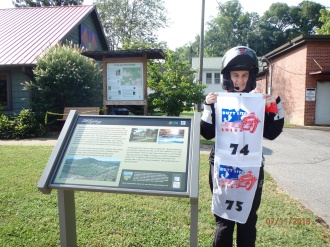 On the way back down the hill we saw an animal unrecognisable from our previous experience. It had a wiggly bum and a furry tail and in the absence of a better name we dubbed it Gluteus Wigglus while I giggled on the back of the bike. It may have been a groundhog. Or not. We may have discovered a new species not previously known to man. Who can tell?? 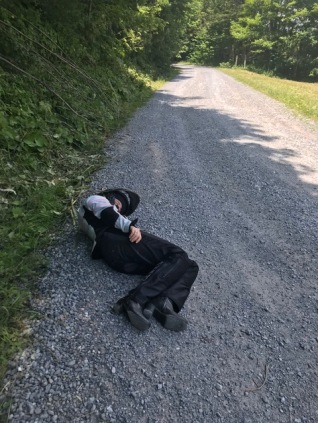 We stopped for a late lunch/afternoon tea somewhere that had a Starbucks (I can no longer recall where this was) and as we were leaving got a text to say that we should use the coordinates from the rally book for our next bonus. We did a quick check and discovered that we weren’t going make it in time (it was a time limited bonus, closing at 5pm – it was 4pm and we were still an hour and a half away). I should have realised it was going to be an issue when the bonus point description said ‘Appomattox court house’ and the little red dot was about 50kms west of the town, but I repeat: sleep deprivation.

We re-jigged our plans to get to a different time limited bonus – Booker T Washington and booked a hotel for the night in Bedford, VA, about half way to our next bonus point.

This was where I tipped over the edge from fatigue to exhaustion. On the way, Kiwi mentioned we should get me some new thongs, so I didn’t have to keep wearing my motorcycling boots for dinner. I did a search and found a Walmart that was about 5 minutes off our route – then the conversation went something like this:

Piglet: So, there’s a Walmart about 5 minutes from the hotel
Kiwi: Is it on the way to the hotel?
P: Not directly, but it’s not that far off.
K: What about Dollar General?
P: Do they sell thongs?
K: I don’t know, they sell stuff.
P: But do they sell thongs?
K: (joking) They sell stuff!
P: (not finding this funny) But does the stuff include thongs?
K: …
P: (thinking) I am only getting of this damn bike once. If Dollar General doesn’t sell thongs I’m going to be seriously annoyed. And he’s going to hear about it!
K: (thinking) Time to get off the bike!!! She’s losing it!

We got to Dollar General (which was closer than the Walmart) without issue, and thankfully for all involved, they had thongs. It took me 15 minutes in the store. Not only did they have thongs, they had them in multiple sizes. And I could no longer make a decision about what size to get – I wasn’t taking my boots off to try them on. It took me a good 7 minutes to come to the conclusion that the thongs were only $1 a pair, and I could buy 2 pairs for $2 and they’d probably fit on the bike… If they didn’t I fit I could leave one pair at the hotel.

Kiwi suggested he could drop me at the hotel to check in while he filled up the bike, which sounded attractive but I was all about the ‘rules’ and I think there’s something about both people needing to be on the bike the whole time and it seemed like I would be cheating if I went and checked in while he was getting fuel. So I went along to the fuel stop, and then we hit the hotel.

It took 30 minutes to check in. Two people were in front of me and only one had ID but they wanted two rooms. Then the phone rang. Meanwhile Kiwi was outside on the bike in the heat. By the time we got a room arranged I was feeling very anxious and my brain was on overdrive (I should have come and checked in while he got fuel, I should have picked a different hotel, he’ll be getting hot, maybe he should come inside, should I be more assertive here…).

We unpacked the bike and showered but when we went to charge our helmets we couldn’t get any of the powerpoints on the wall to work! In rearranging the furniture to try to get to a powerpoint Kiwi bashed his leg quite hard against a metal thing under the bed and then I nearly burst into tears… It was all too hard and I could no longer manage normal functioning.

After dinner in the hotel Mexican restaurant (delicious but enormous), I fell into bed – but was still so worked up it took me a good hour to calm down and get to sleep. I was crying for no reason just cleaning my teeth. I was exhausted and stressed and even though I knew I was fine, and just tired, it felt like the worst place in the world. I think I fell asleep about 8pm hoping like anything that tomorrow would be better. Thankfully it was – but more about that next time!