So after not that much sleep, but more than I was expecting, at 5.30am I was awoken by the Kiwi who was revved to go and had bags packed!

I was not ready to be awake, but after some food and coffee things were looking up. We got all our gear on the bike, with some room to spare, and then counted down to the 7.30am riders meeting and 8am start time. This time it was Kiwi who had the fidgets, while I was relaxed (or still asleep, they look pretty much the same).

With no last-minute bonus points handed out, things were pretty calm leading up to the start and we rolled out of the parking lot to our first bonus – the Kentucky University stadium only 10 minutes away.

It was good to get the first bonus done, but we didn’t really have a neat system worked out. One of the bigger disadvantages of using this bike only once a year is that we didn’t have the opportunity to practice with the setup we had on the road. The custom-made tank bag the bike came with (designed specifically for an IBR rider) is perfect for the job, but it was hard to have both of us on the same side of the bike trying to do different things. Since I have neater handwriting, we’d agreed I would write up the log. Kiwi was in charge of the camera and obviously my role was holding the rally flags so they could be seen. This is easier said than done when there are two flags and a breeze is blowing. But between us we managed it!

It was pretty busy with lots of other riders collecting the same bonus but thankfully at 8am on a Sunday the parking lot provided plenty of space for us to spread ourselves out.

It took a while for us to figure out our routine on day 1, but we got there. I had the rally book saved in my iBooks on my phone and as we got to within about 30-45 minutes of the next bonus, I would read the bonus point out loud over the intercom (sometimes twice). I’d read it out again when we got closer, focusing on the thing we needed to do (take a photo or get an answer) so we were ready to go when we got really close.  Eventually we also settled on a process off the bike where I went around the ‘other side’ of the bike to do my thing, while Kiwi stayed on the normal side. He’d get the camera, I’d get the flag, we’d take the photo and then I’d write up the score sheet/log while Kiwi was punching in the next bonus in the GPS.

We hit a few bonuses on our way to Louisville and rode some beautiful roads. 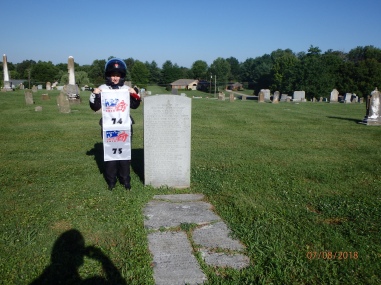 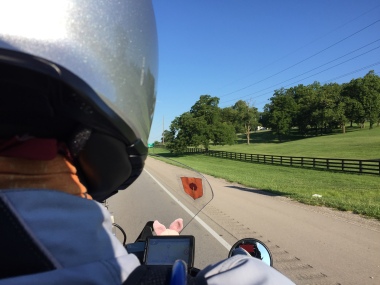 Then it was time for the giant bats. The rally book had two ‘giant bats’ – coded RGB and RBG. Not being locals, we weren’t familiar with the Louisville bats. I had in my mind that I was looking for flying bats, but a google search on the back of the bike suggested that we were looking for a very large baseball bat as one of the bonuses. It was pretty hard to miss! Standing about 6 storeys high, the ‘Louisville Slugger’ is definitely a giant bat and it was the first one on our route. Of course having found the baseball bat, we were looking for a second bat and getting Kiwi to stop the bike for a flying bat on a wall went something like this:

P: It should be just down here on the left… There it is!
K: Where?
P: Right there! on the wall! In front of you!!
K: I can’t see it
P: (hitting K on the shoulder and gesticulating wildly at a wall) Just stop the bike here!!!! Park anywhere! It’s there! Right there!!! No, Stop!
K: Oh! I was looking for another baseball bat! That’s very confusing…

We got there in the end… then found the giant horse statue, and decided it was time for a coffee break!

Kiwi and the Louisville Slugger

After coffee and a snack, we headed back to the interstate and south to the grave of the world’s greatest cave explorer, buried in Mammoth Cave National Park. The roads into the park were gorgeous, and we even saw some signs to make us think of home!

Out of the park, we headed to our second stadium bonus in Nashville (where we spied fellow rider Dylan filling his new Goldwing with fuel and his tummy with M&Ms) and I had my second experience of the day with people asking us what we were doing. It was easier to let the guy take our photo together than knock his kind offer back – and I’m pleased we have at least one photo to show Kiwi collecting bonuses!

A kind and curious passer by took this one for us!

I had also started pondering whether we could improve our route. The route we originally planned had only two bonuses between Nashville and Oxford, TN where we were planning to stop for the night – but it looked like we could do the Natchez Trace Parkway (a road we’d wanted to ride since early 2016), collect more points and not add too much extra time to our trip.

The plan on the fly

So we changed our plan on the fly and it was awesome! The Parkway is beautiful (even if speed limits are a little slow) and we had it almost all to ourselves. Apart from a few cyclists and the occasional tourist, we saw almost nobody else on the roads. We got into a pretty good routine with taking the photos and writing up the log, and I think we both started to relax into a rhythm. 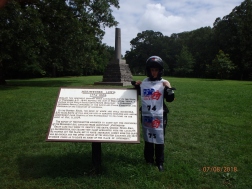 One of the many memorials in one of the battlefields just off the Parkway. 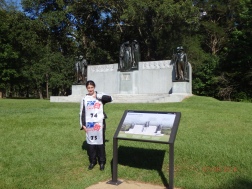 Bonus #4 on the Trace

We weren’t sure which ‘old trace’ sign we were after – so we got both!

I find the battlefield parks in the US quite moving and, perhaps ironically, peaceful. Often there are very few people around but lots of memorials and large grassy areas. I think it’s nice, and important, that the histories of these places and people are remembered, even if I wish the wars themselves hadn’t been necessary. 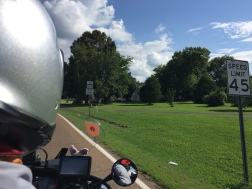 We stopped for a break to have a snack and cool off at the Shiloh National Military Park and I was starting to feel the fatigue. The heat had been sitting between 100 and 105 F all afternoon and since we’d been travelling west and changed time zones, the day was an hour longer than normal. We had two more bonus stops for the day before we packed down for the night and I was itching to get them out of the way.

Our very last bonus was at ‘Ole Miss’:

It turns out Chucky’s simple philosophy was ‘Never Quit’, which I dutifully wrote in our log, but we also took a photo for good measure. Thank goodness we did! I woke up in the middle of the night fretting that perhaps it was all in capitals, or there was something else – in the end, our answer read: “NEVER QUIT!”, which got us the points – it needed the punctuation!!

Dinner was very average – gas station food – because I couldn’t face getting back on the bike at 9pm after an 8am start. The zipper came off my pannier bag (!!!!!) and I realised I’d left my thongs (flip flops) back at the hotel in Lexington. Thankfully I managed to get the zipper back on – I don’t know what I would have done otherwise because we didn’t have a back up – and after food and a shower I crashed for the night. Apart from the midnight freak out about our last bonus, I slept like a log. 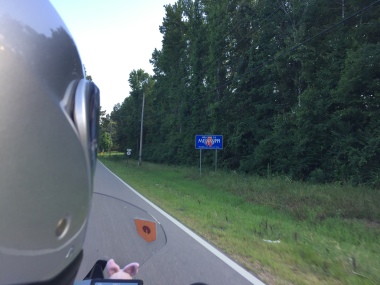 One thought on “Day 1: Lexington, KY to Oxford, MS”