Today was our first test run of a rally routine and all I can say is that it’s just as well we’re starting now!

In terms of ride preparation, this one didn’t start brilliantly – last night was a late night out watching the BBL cricket at Manuka oval so we were both a bit tired starting out. But it was a low point for me when we pulled into the local shops and the conversation went something like this:

Piglet: ‘why are we going here?’

Kiwi: ‘to get a starting receipt’

Piglet: “oh… that’s something I should get good at doing, right?” 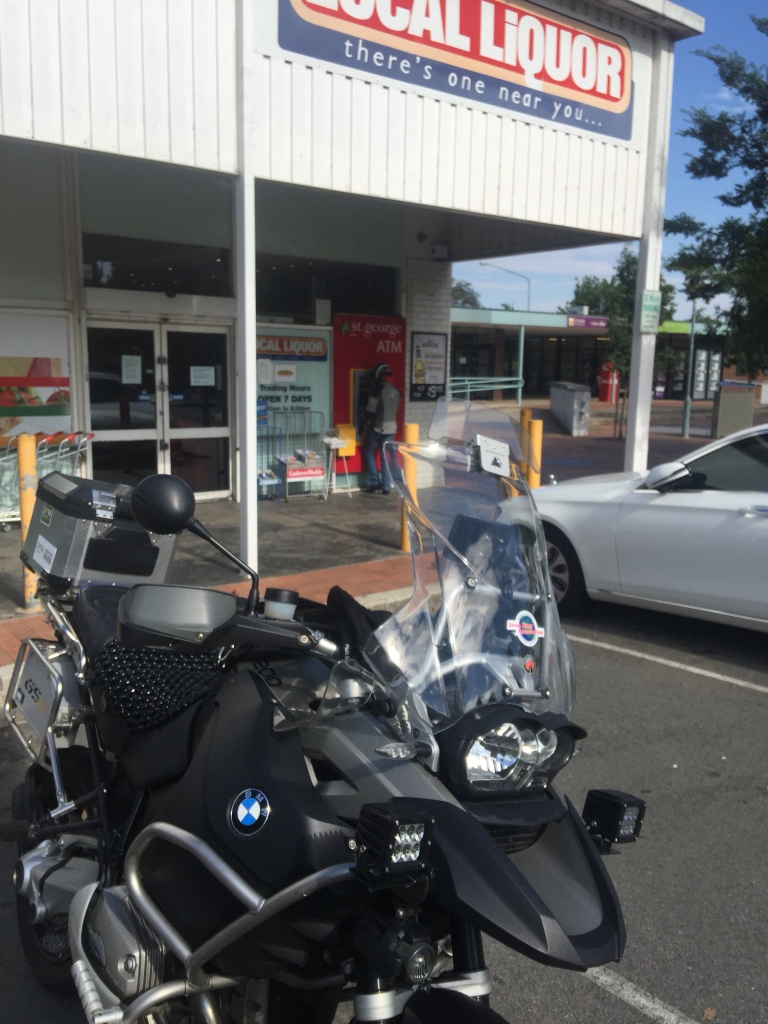 Me fighting with the ATM… I won… eventually…

To be 100% honest, I hadn’t fully grasped that today was going to be a rally test day. Not that I hadn’t been told, or that I didn’t know, but it just hadn’t hit that level of consciousness where I realised that we were actually doing this thing… So we didn’t start all that well. I had to have three goes at the ATM to get the receipt, then I started asking questions:

Piglet: ‘So, is the camera in the Camelback’ (on Kiwi’s back and therefore accessible to me)

Essentially, I was asking all the essential questions too late. Kiwi had all the gear where he would usually have it if he were riding a rally solo, and I hadn’t given any thought to this prior to getting on the bike. So after some bitching and moaning on my part (it’s actually quite warm… I think i need access to the camera… surely…) we had a conversation about how we’d do this rallying thing – I could get off the bike take the photo with the flag, Kiwi could write up the log while still on the bike and we could go again. Even when the rally instructions were more complicated surely I could read them aloud through the intercom and we could do it that way?

Long story short, we have a lot of things to work through, but at the first ‘bonus point’ there was some rearranging going on. The camera and rally flag moved to the camelback, I dumped my camelback in the top box and from then on things were pretty schmick at our bonus point stops. Stop one was the War Memorial at Gundaroo… since we’re not totally sure about what the rules are, Kiwi had a staring role in the photo: 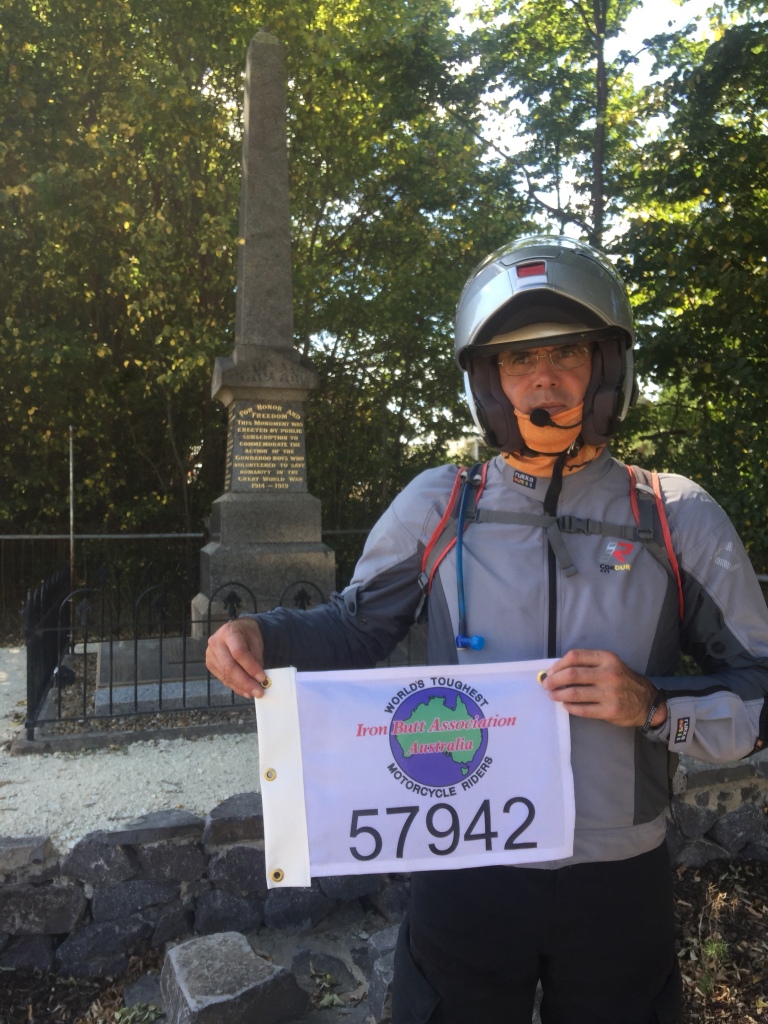 In all, the first stop, including a bathroom stop at the local public loos was 10 minutes. Not terrible, but not Butt Lite material. From Gundaroo we headed north through Gunning and up to Crookwell. This bonus was my first chance to show how fast I could be at this – off the bike, rally flag in hand, walk to the memorial, ‘click’, then back to the bike. I think we were on the road again in less than 3 minutes with log written up and photo in hand.

From Crookwell we headed further north to Taralga where things got a bit tricky – the memorial wasn’t where the map said it should be, so we got a photo of the next best thing, the centennial plaque, and stopped for lunch at the Ploughman’s Cafe. It was just what I needed. Food, a cup of tea, and some time on a normal seat. Afterwards we asked the staff where the memorial was and were directed efficiently up the road (past where we rode into town!) 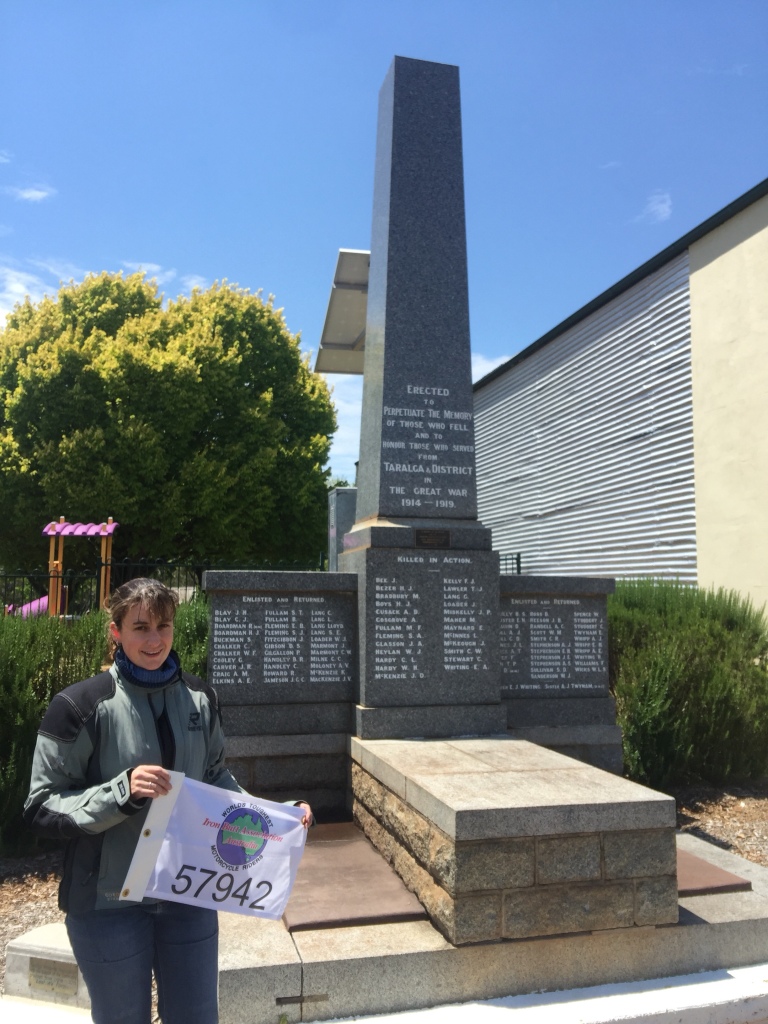 Helmet hair leaves much to be desired, but that’s something i’ll just have to get used to.

Our last bonus for the day was Tarago on the way home and by then we had the routine down pat, though I perhaps was a bit cheeky when i accused the Kiwi of being inefficient when I was ready to get back on the bike before he’d finished the log… Nevertheless, we were done and on our way in record time (for us).

This was where things started to go wrong for me. It had been warm all day, and that was ok while we were moving and I can push through up to about 35 degrees without too many dramas. But my back was starting to hurt. A lot. We got home ok, but given the ride was only about 320kms in total, it made me worry about my ability to get through a 6 day rally. As we arrived back into Canberra I was feeling fatigued, hot, and in a lot of pain. I got home ok, but needed to do lots of stretching and moving to feel normal again.

Our regroup/debrief at home was good. I was tired and pretty disappointed with my ride fitness, but then I can’t really expect much different when I haven’t done much time on the back of the bike recently. Between now and July I need to do everything I can to improve my core fitness and test my limits in terms of fatigue and ride time – otherwise we’re going to be DNF and that’s something I don’t want to be responsible for.

One response to “Practice makes… average?”